An Ode to Russian Apartments

One of the images you most likely have of Russia outside of St. Basil’s Cathedral, Red Square, the Church of Christ the Savior, and the Church of Spilled Blood are the ubiquitous apartments. A lot of friends and family have asked me how do I live in smaller space, and I honestly haven’t really developed an adequate answer. Thus, I figured I’d clear up some misconceptions as well as adding my 20 kopeks.

1. The apartments look gray and depressing. How’s the interior?

You know, my first impression of my first apartment was basically “Oh my god, the exterior looks burned out. I cannot believe I’ll be living in that for a year.” However, as the saying goes, looks can be deceiving. Inside is a whole different story, as my apartments have been cozy and, surprise!, modern. Ever since I arrived on the hallowed Russian soil, I’ve found that things in apartments are equal to things back home. They’re even, dare I say, cozier.

As I said above, very cozy and modern. It depends a bit on your landlord/lady, as I’ve been in apartments that clearly were refurbished ahead of move in. Things do also depend on when your apartment was built, as I’m told that different leaders of the Soviet Union had their own unique vision regarding the state of housing. Thankfully, my current one was built (probably; I don’t have any official confirmation, but I’m using the trusty eye test here) within the last twenty years or so.

One thing that is a remnant of the Soviet Union is the layout of the apartments themselves. Within the housing complexes, you have your individual buildings. To get through, you need to carry either a key and/or passcode (which makes you feel like a suave spy at times). Once inside, you have four apartments on each floor. With my first and current ones, you have two doors to get inside. The first is the general one for the floor, and the second one is for your own one; somebody told me that it’s to block off nosy invaders, but personally I think it’s a bit too complicated to get home. Consequently, you carry quite a few keys just to get inside.

3. I’m moving to Moscow/Russia. What can I expect to find?

Again, I’m no expert, but in the apartments I’ve lived in and visited, the bare minimum is a bedroom, living room (odds are it has a sofa bed), kitchen, bathroom and/or toilet; I say “and/or” here because some places have the toilet in the bathroom whereas in my current situation, they’re adjacent. Alas, there’s not drying machine, as apparently it’s an alien device. If you’re a lucky tenant, you’ll have a balcony-I myself have two, and I’m oh so blessed. Some previous tenants may even leave some cutlery or other miscellaneous tidbits behind, so I recommend checking out all the drawers when you move in.

In my own experience, the rent plus utilities has come out to roughly 23,000 rubles, which is equivalent to $385. Friends back home have told me that rent could be twice that, so I’m honestly not complaining about what I’m paying. Of course, if you live closer and/or in the center of Moscow, you’re going to pay a ton more, but there definitely are bargains out there. Just be vigilant and you’ll find something!

5. Are the apartments warm?

Oh, yes. The thing with apartments here is that there’s centralized heating, meaning.a) moderating the temperature is out of your hands and b) it gets warm. My parents were really shocked when I told them I can wear shorts and a t-shirt indoors. It actually has gotten to the point where I’ve had to open windows because it’s too stuffy. (As I write this, weather has been hovering around -10 to 0 degrees Fahrenheit/-27 to -20 degrees Celsius. I absolutely welcome some stuffiness.)

4. How do you cope with the small space?

Honestly, you get used to it. With me, excessively big spaces weird me out, so having a compact living space has been great. With my room, aka the living room, the proportions are just perfect.

5. Don’t you miss your house back home?

Sometimes, but I’ve been here for long enough that it actually feels (literally and figuratively) foreign. I do kinda, sorta miss driving, but then I realize that I’ve blissfully ignored the madness of the mess that is driving in the D.C. area. Oh yeah, having an actual bed is something that I’m not taking for granted. Which leads me to my next point…

6. You’ve been sleeping on a sofa couch. What’s that like?

Not that bad, to be honest. Granted, I’ve been sleeping on them ever since I arrived, so I’ve acclimated. It’s funny, though. Whenever I stay in hostels, there’s inevitably some complaints about the bedding and yet I love having an actual mattress. So, it’s a matter of perspective. Yay for broadened horizons!

7. What’s one downfall of living in one of those apartments?

For me, it’s the lack of air conditioning. Summers are rough, partially because there’s nothing you can do to cool down aside from opening your windows. A minor complaint is having no drying machine, but it does make you realize just how much of the “small things” from home you take for granted. However, this problem is easily solved: use a laundry line and/or a laundry hamper.

View of the apartment as seen from the entrance.

View from the main balcony. 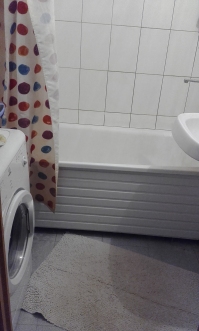 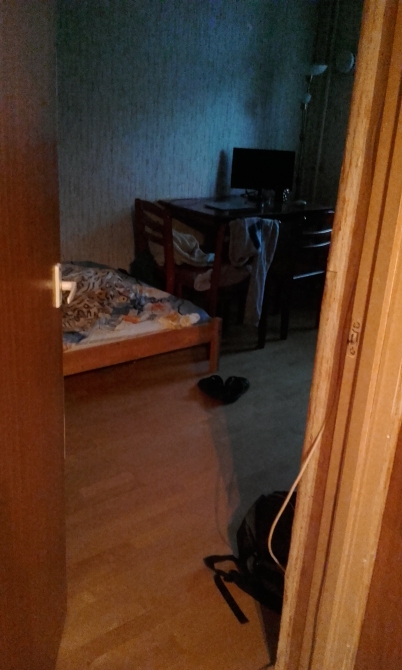 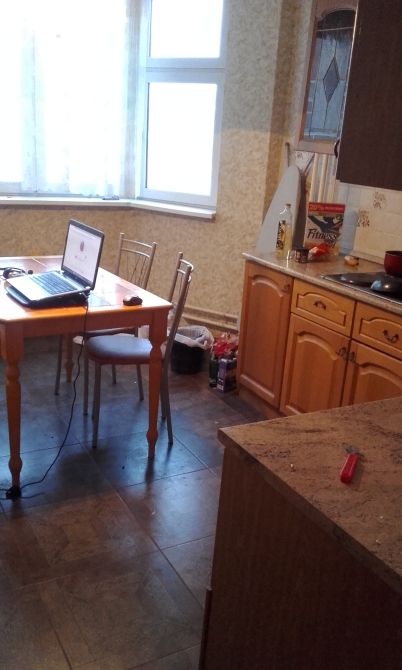 Our kitchen. On the far right is the sink and other cupboards.

One thought on “An Ode to Russian Apartments”