As today is St. Patrick’s Day, I wanted to commemorate it, and I figured it would be more than appropriate to look back at the time I visited the Emerald Island. At the time, this was the first trip I took without my parents, so it was significant. Granted, our teachers did a good job of taking care of us and making sure we didn’t try to drink (it was part of our stipulations in order to be part of this). The best part of this segment of the overall journey was how we went to other areas in Ireland and not just the capital. In a way, that fueled the flames for my desire to go off the chronicled paths and into non-mainstream regions. Looking back 8 years later, I think that the magic I encountered as a 17 year old high school junior still remains.

The entire reason that I went to Ireland was part of an A.P. European History trip. While it wasn’t the main focus (we went around the U.K.), it was the first leg. Our itinerary was fairly simple: we flew in to Shannon Airport, stuck around County Kerry for a bit, then make our way up to Dublin where we’d eventually take a ferry to Wales (which included everybody’s favorite town, Llanfair­pwllgwyngyll­gogery­chwyrn­drobwll­llan­tysilio­gogo­goch). Culture was a huge part, so we made sure to visit the main sights in southern Ireland, which included the jewel of it all: the Ring of Kerry. With that in mind, it wasn’t as if we had to always be cultural-it was a spring break trip, so quite a bit of leniency was involved.

We had an eventful time just leaving the airport, as our bus broke down in a very small town. At the time, it wasn’t too bad, as not only did it afford us a chance to bond, but we also got experience time in a gorgeous little town. To give you an idea of what it was like, imagine you’re driving on the highway with nothing but lush, green fields, replete with more sheep than you can count, all around you. Now picture finding a village seemingly appearing out of absolutely nowhere and bam, that’s where we were. Although, that was one cozy looking village that we happened to be stuck in for an hour. Even today, I still think it was a good thing that it happened when it did. 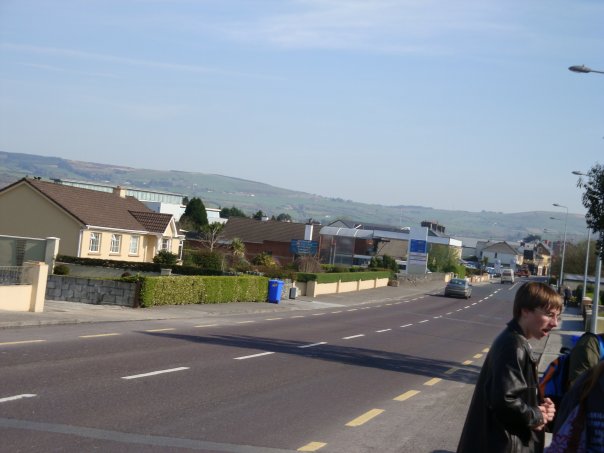 The most picturesque bus breakdown you could ask for.

Our first few days were spent in Killarney, as it was strategically placed on the famous Ring of Kerry. While it wasn’t the biggest town (pop. 14, 219 as of 2011), it was nice to have a base in a quaint place. One of the first things we saw was a horse carriage, which further perpetuated the small town Irish feel. Being 17/18, we all decided to hop on, and we were justified by being able to see more of the town. In our impressionable minds, this was pretty awesome, and totally worth the money we paid. Hey, you had to start off your trip in a memorable way! Later on in the day, we were lording it over our friends who didn’t choose to do this, despite hindsight proving that it probably wasn’t all that justified. Yeah, we were pretty overwhelmed with giddiness by merely being in Ireland. 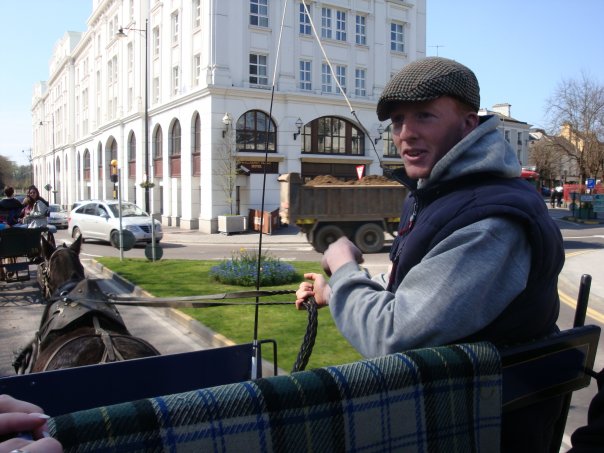 Being teens with no real world experience nor owning a large reference pool, we thought our driver’s accent was the best thing ever.

There are a few things you most likely think of when the word “Ireland” is uttered, Guinness and the Troubles notwithstanding. The quote-unquote “gift of the gab” is something that, beforehand, people were mentioning to me (my dad absolutely is included in this statement), and it’s often manifested in the stereotypical leprechaun. All of this is my way of saying that Blarney Castle and the famous Blarney Stone was included when our wonderful chaperones planned this trip. For those of you unaware and/or uninitiated, the legend goes that whomever kisses the stone will magically find themselves with the gift of the gab. Naturally, we had to do this. The castle itself wasn’t special, if we’re being honest here, but at the top, you could see the scenic Irish landscape. Regarding the stone, you had to sit on your back but lean down in order to kiss it. Doesn’t sound scary, right? Well, you had to look down at the (thankfully barred off) drop, so it was intimidating; I do think that as a slightly more mature 25 year old, this wouldn’t have that much effect on me now. Two gents helped to hold you down while you puckered up. After all these years, I still think it’s one of the neatest things I’ve done, and call me crazy, but I think I’ve acquired a slightly more noticeable increase in my speaking skills. (Somewhat diminishing this sense of accomplishment was being told an hour or so later that people have, incredibly enough, peed on the stone; you’re welcome for that fact. Now pass the breath mints.) 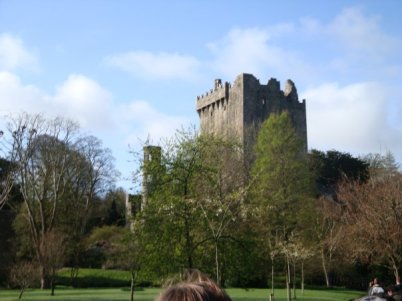 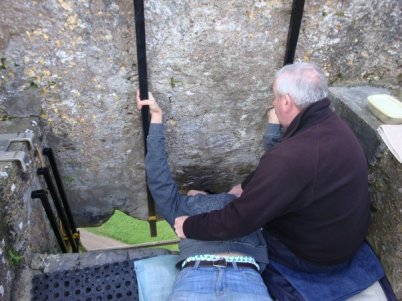 Hey, I did it! Also, I was unironically wearing the shamrock boxers I purchased the day before. I have no regrets.

After a fairly memorable stay in County Kerry, it was time to head up to Dublin for the final hurrah in everybody’s favorite country. Thankfully, our bus made it up there unscathed, and we were treated to some more gorgeous countryside. One of my favorite anecdotes I came away with during that trip was seeing one mother sheep knock over its child. The glorious part about it was that it happened in what I swear was slow motion. Ireland, man. At any rate, that was the winner of the most exciting thing to have happened whilst on that route, which is to say, nothing much happened.

Honestly, I didn’t, and still kind of don’t, know what to expect of Dublin. I guess maybe you imagine that it’s just bars, which I know really is a bit of a slap in the face for the city. When I was there, I did see a thriving place which I’d really love to go back and explore more in depth and with a better sense of purpose. Our hotel was just outside the city center, so we had to spend about ten to twenty minutes to get to the higher density areas. Because we had maybe two days, we sadly couldn’t too much. No worries, the center was plenty enough for us! As with so much of this post, when I look back on my stay there, everything was wonderful. The cobblestone streets hearkened back to early centuries, and it was a blast exploring them. From an aesthetic standpoint, everything was simple yet efficient. The juxtaposition of new and old were seamlessly blended together, so visitors and locals alike felt very much at home. For us, this was very much the case! But with all good things, it was time for us to wake up at the crack of dawn to board our ferry to the Welsh island of Anglesey. 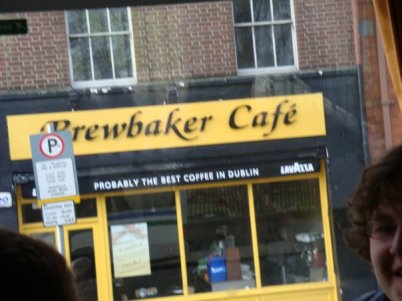 Their confidence in their quality is outstanding. 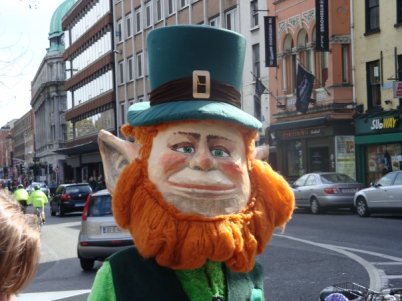 We ran into this guy while on the mean streets of Dublin. I’d imagine this being super creepy at night.

Writing this almost a complete eight years after this school trip, I admit to feeling very nostalgic about Ireland. Even if we were limited to activities based on what Mr. Novak and Dr. Campbell scheduled for us, I like to think we made the most out of it. And furthermore, it’s rekindled my desire to retrace our old paths and even create new ones in the near future. Ireland, you’re a fun place which I hope more people get a chance to visit.