Quirks about Russia, round two

Preparing to go home to visit for a week has not only gotten me excited, but has made me realize some of the peculiarities that Moscow and Russia has to offer. I also wanted to have an updated follow-up to my original post, which was written just under three years ago when I first arrived in Moscow. Some of these will be new while others will be amended, so just enjoy!

-When entering apartments, it’s a thing to take off your shoes. Not doing so is akin to blasphemy, and you’re a heathen if you don’t immediately remove your footwear. Even if you briefly walk around in shoes, you feel like you’re a horrible person. Thankfully though, plenty of people will have sandals for you, should the feel of socks/bare feet on the floor bother you.

-The abundance of fast food chains (i.e. McDonalds, Burger King, Sbarro, and KFC) still takes me by surprise; I’ve literally had more chicken here than at any point in my life leading up to departing for Russia. I also can’t get over the fact that for Burger King and KFC, you can buy beer as your drink of choice. Can you even imagine that back home? You could pregame for a night out over burgers and/or chicken, then go out to the main event. Madness, I tell you.

-Back in September 2014, one of the first things that stuck out to me was how batsh*t crazy Russian drivers are. Whether it be their obnoxious parking habits (yeah, thanks for occupying space on the sidewalks) or their driving skills, it makes life back home on the roads seem tranquil in comparison. There are two anecdotes that I’d like to share that reinforce this point. The first: in 2014, it was reported that nationwide, over 500,000 baseball bats were purchased. The kicker? Only one ball and glove was sold. Road rage is absolutely thriving, and I encourage you to check out the myriads of dash cam videos on YouTube as proof. The second anecdote is that yesterday, I took a taxi, and it felt like an amusement park ride. To my driver’s credit, he was totally in control and we weren’t in any risk of danger, but man. There’s something about Russian road etiquette that turns people in psychopaths, because I’ve since lost count of the times where cars would stop mere inches in front of your own.

-Remember when I mentioned that Russians tend to be fashionable? On the whole, yes, they are. I’ve seriously felt under dressed at times, compared to the dapper lads and ladies I see every day. I mean, plenty of Russian women wear heels and tights in the middle of winter, in sub-freezing weather. But, that’s not my point here. On the flip side, I’ve seen some fashion that lived and died in the 1980’s (long live the mullet!) but are bizarrely being reincarnated. Another trend is that you have guys wearing loafers with socks. Bleh. I get it, some Central Asians can’t quite afford it, but honestly, they look aesthetically displeasing. And on that note, there’s a hilarious juxtaposition where guys, who aren’t breaking any stereotypes, wear matching tracksuits…with dress shoes.

-If you don’t have exact change when buying and paying for things, prepared to be judged with extreme prejudice. I’ve always been made to feel like I’m a horrible human being for giving the cashiers the Sisyphean task of looking for change if I don’t have a few rubles.

-On the topic of money, tipping really isn’t a thing here and that waiters/waitresses don’t expect it, which was a habit that took some time getting used to; whenever I’m home I have to remind myself TO tip. Case in point: I spent quite some time explaining how to tip with one of my students, especially since our lessons took place in a cafe. In one of the expat Facebook pages, there was a fairly sizeable discussion on the proper way, with expats and locals alike chiming in. Bottom line is that if you do feel inclined to tip, you’re better off rounding to the nearest large number, i.e. to a fifty or hundred.

-Every now and then, you see pets in the metro. I once saw, for example, a guy with a ferret in a cage, which honestly didn’t seem too out of place.

-Another possibly “just Moscow” thing is a fairly strong prevalence of American-style diners. While I think some (Starlite) are better than others (Beverly Hills), I do appreciate the Americaness of them-they’re where I go to satisfy my cravings for a milkshake and nachos. Having good ol’ rock and roll playing is a nice touch that I enjoy, and the layout of them is pure vintage 1950’s American diner.

-I concede that it may be chalked up to a lack of me looking, but ethnic restaurants are not as forthcoming as I’d hoped. By ethnic I mean more Asian and Latino places, because I’m satisfied with the amount of Pho/Mongolian/Tatar/Uzbek and Central Asian/Buryat/etc. places. I want my spicy food, dammit! (Side note: there is an Ethiopian place not too far from Kurskaya metro, but I’ve yet to go. I keep meaning to, but finding the time is difficult.)

-Completing the troika of food-inspired points, it’s never ceases to entertain me to see flyers for sushi and pizza places. Sushi is the food that keeps Moscow going, but along the way, some genius decided that they wanted to spice things up. Hence, a complete 180 to open up menus. Bonus goes for the one time I saw another flyer advertising a place that specialized in sushi, pizza, and shashlik (Russian barbeque). Talking with friends, it’s clear that these restaurateurs want to attract customers, but in doing so, they don’t focus on one things. Which would explain the high turnover for said restaurants.

-In the west, you know when you’ve stepped onto the campus of a university. Here in Moscow? You may unconsciously have passed by one, because they’re so inauspicious. (Maybe this is just a Moscow thing, though. No idea what it’s like in the rest of the country.) My ex-girlfriend’s university (or rather the building she studied in) is tucked away in a quiet residential area, which is mind boggling to me. 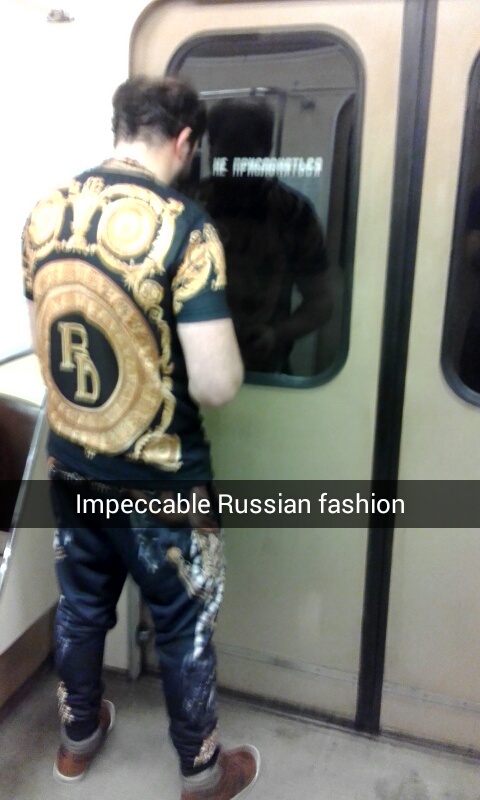 Opulence, he has it. 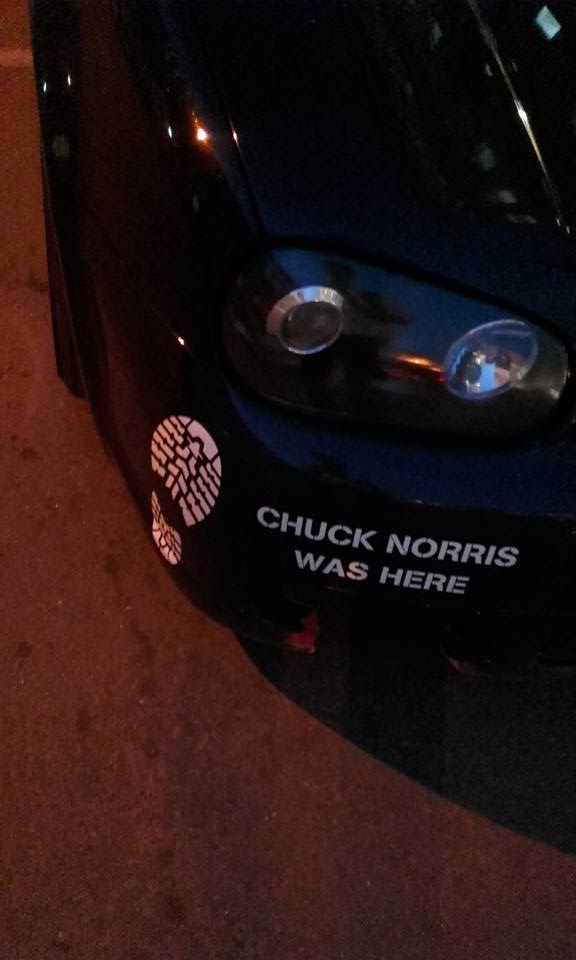 Saw this bumper sticker last year, and it seems rather appropriate given the traffic. 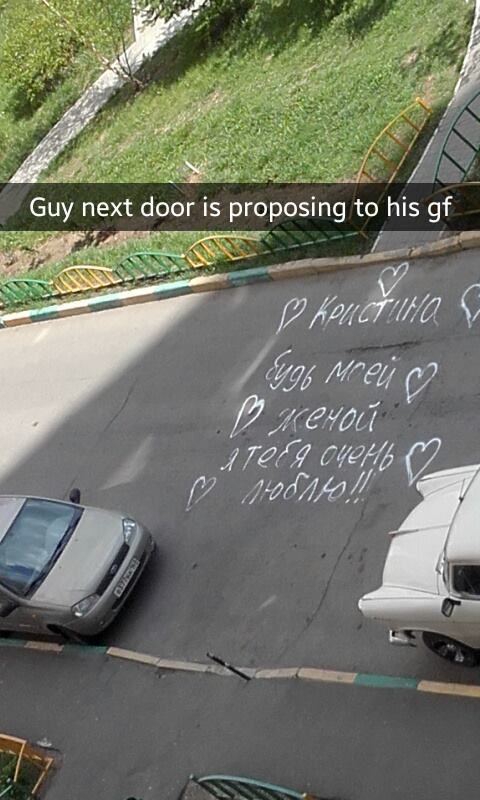 Seen outside my apartment last year.