The hilarity of seeing Russia in Western entertainment

Coming from America to Russia, I had some preconceptions of the latter due to it not being very well represented. I mean, there’s the classic stereotype of a leggy blonde Russian woman with blue eyes as well as the boozy bruiser wearing a shapka ushanka (the ubiquitous poofy hats) named Boris. Living here for three full years and counting, I’ve seen a lot to dispel those stereotypes (although I have seen big guys drinking very early on in the day), so I always feel a bit annoyed when I see them portrayed in Western movies and shows. Thus, this post is going to address my biggest peeves.

For starters, it induces fits of giggling whenever I and my Russian friends and students see a misgendered surname. The biggest offender of this is Marvel and Black Widow. I mean, “Romanov”? If she’s female, it should be Romanova, otherwise people are calling her a man; a group of my students had a field day when I brought that up with them. I understand that sometimes, Hollywood tries to make up names for Russians, but they come off as hilariously unrealistic. As a general FYI, female names will end in -ova or -aya, and males with -ov or -iy/-y. So, as authentic as you want to seem, not getting this simple rule down immediately ruins that idea.

This next one comes courtesy of one of my favorite TV shows (Archer) and an underrated video game (Alpha Protocol): Russian apartments. The famously grey residences either are made to look like the shabbiest things ever or spacious hubs of ridiculous opulence. For sure there are some apartments, especially the communal ones, that would justify this stereotype, but overall I’ve found my time in Russian housing to be very cozy. You do give up some personal space, but there’s an oddly satisfying feeling that you have all the room to live in you could ask for. In the game, the Moscow level features an (obligatory) snowy backdrop, but when I look back on it, I find the apartment unrealistic. I mean, it looks like a studio apartment in New York! Well okay, that and the fact that there’s a loft inside it, which doesn’t exist in Russia. Looking up prices for flats here in Moscow can be mindbogglingly high, so I just wonder where agents can afford to live without attracting unwanted attention. Or barring a magical infusion of cash, how they can constantly maintain a residence of that quality.

In the past I’ve had some students who have been overly conscious about their pronunciation, which possibly could reflect a cultural thing. Why do I mention this? Hollywood tends to ham up the Russian English accent, which perpetuates the time-honored stereotype of Russians speaking in an accent so thick you could cut it. (Not that this stops friends from switching to *that* voice upon demand.) As an ESL teacher, my experience with this has been different. Certainly, some good folk have stronger accents, but in general I’ve found that most accents aren’t too strong; heck, I’ve met people who I originally thought were British thanks to their impeccable accents! Foreigners vastly understand the influence Western shows, movies, and video games wield in regards to pronunciation. Students and friends have told me that they’ve learned via these methods, and it’s oddly satisfying to hear an incredibly American phrase or an accent ripped directly out of a posh London neighborhood. This makes my job quite a bit easier, and there has been a noticeable lack of miscommunication, especially in this day and age of globalization.

Unique to the former Soviet countries is the concept of the patronymic, but as far as I’ve seen, you wouldn’t be able to tell that thanks to pop culture. Granted, we don’t have that in Western culture, but still, it’s a major miss. For me, it took some getting used to when people would be referred to, as an example, Andrey Semyonovich. Their surnames are secondary to both their given and their father’s names. Rarely is it when you’d only use their surname (фамилия), so the habit of doing so in shows and movies is entirely a misplaced habit. Following up on that, I’d like to say that some invented names are really strange, especially in action movies/games. Chalk that up to simply not doing the research, but the majority of Russian surnames are derived from professions and adjectives. Figured I should throw that out there for reference. You know, in case any Hollywood executive is reading this.

Lastly, the wanton usage of Cyrillic is arguably my biggest peeve. Yes, it looks different, and yes, some people try to be clever and use the backwards “R” whenever Russia pops up in the media. Spoiler alert, that Я makes a “ya” sound and is the personal pronoun “I”. The biggest offender of this was the infamous moment in the Jason Bourne franchise when we saw his passport. I’m not sure what went through the props department’s mind when creating it, but it’s so bad it’s good. Though in the cases that other producers do their research on the correct usage of the alphabet, I’d like to tip my proverbial cap to them for striving for an accurate setting. Never underestimate the derision you’ll pick up when eagle-eyed viewers realize you done goofed.

If there’s anything you think I missed or would like to argue with me about, feel free to let me know! I’m sure I’ve neglected to comment on some things (like always), so correction is always welcome. 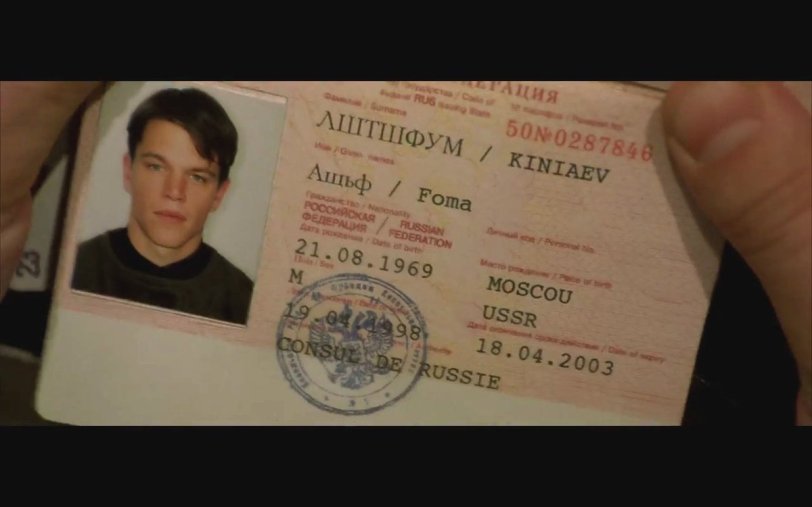 2 thoughts on “The hilarity of seeing Russia in Western entertainment”