Day One in Volgograd

After having arrived in the city formerly known as Stalingrad late Thursday night, Friday was my chance to really see what the city had to offer. Things got off to a bumpy start, as the high heat (about 86℉ in a wooden dorm room) meant I somehow woke up at four in the morning; I went to bed at midnight, so you can imagine how I felt about life during that moment. Thankfully I was able to sleep for another hour more, but in general, I felt a bit lazy and thus spent the whole morning relaxing on my bunk. When I did decide to head into town, I did so knowing I wouldn’t be back until late. See, my hostel is situated on the outskirts of the city (my taxi driver referred to it as the “old Soviet part”) to the tune of five miles from the center. It also is pretty obvious that in a former life, the hostel was a barracks of some sort. Therefore it was fairly obvious that constantly commuting was out of the question. Now, don’t get me wrong and assume Volgograd is bereft of transport-there’s a 22-station tram system I’ve found to be quite enjoyable. Because we can’t have nice things, it would take me over an hour to walk there on what is equivalent to a highway, so I needed to call a taxi to start my journey. One neat thing about this World Cup is that one match days, all public transport is free with your Fan ID, so I got to transit around with that perk; it should be said that one tram ride is 25 rubles, which is dirt cheap.

After exiting the tram station, I made a beeline to get food. The place I went to was called Denver Burgers, and it is conveniently located in a corner of the center where the highly reputable dining options are all congregated. One also couldn’t help notice that the World Cup Fan Zone was attracting lots of attention, and I did duck in. At this point, my main goal was to kill the three hours before Volgograd Arena opened for early entrance (and six hours in total before the match started; that, however, will be saved for a different post). The famous Pavlov House was about a twenty minute walk straight down the road, so after concluding my meal, my focus shifted to that. I will bite how interesting it was to see the style of architecture on that road, as justifiably it’s post-war stuff. Still, I couldn’t help but somewhat think about buildings you’d see in Morocco. Strange, right? However, I made a quick detour because there was the State Historical and Memorial Preservation on the way. Here one could see the remnants of the incredibly bombed out flour mill, which ironically enough was originally built by a German, as well as other miscellaneous war reminders. The location further reinforced the memory, as it overlooked the Volga-it was easy to imagine the horrors face by both armies in Stalingrad. A War Museum was attached to the premises, but I opted not to go inside as I simply didn’t want to fork out the cash. So, Pavlov’s House was next. As you can see in the pictures, a memorial exists in honor of the 58 days Sgt. Pavlov and his men spent valiantly fending off the German Army. That’s all there is, but as with quite a bit of the city, a massive percent of the city was destroyed and thus can’t be preserved.

Finally, the last major thing I did before heading to the World Cup match was to visit Mamaev Kurgan and the famous The Motherland Calls statue. The former is a huge hill overlooking the city with a killer view, and the latter is a statue dedicated to the battle. Everybody told me that my trip wouldn’t be complete without stopping by, and that was absolutely the case! To get to the statue, which incidentally is the largest statue of a woman in the world, you had to hike up about twenty minutes. However, on the way up you passed by memorials on both sides, and there even was audio recordings of speeches given during the battle! Further along, you passed through the Hall of Military Glory, which also housed the Eternal Flame. What made it super poignant was how, on the sides, the names of the Soviet KIA were written. While there’s plenty of WW2 tributes and monuments all across Russia and the former Soviet republics, this takes the cake. On the way down from the statue, I actually was fortunate enough to witness the changing of the guard. Further tribute to the soldiers manifested in the form of a small cemetery along the pathway; highly polished graves were evident. At the top, whoa. One could enjoy a panoramic view of the city and the Volga, which was spectacular! After spending some time in reflection, it was time to head over to Volgograd Arena for some soccer. But for now, that’s enough for this recap of my first full day in the city. 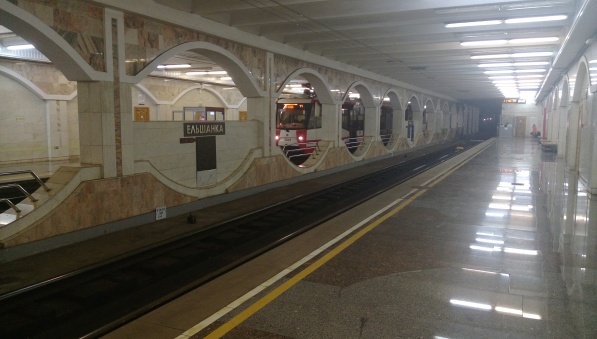 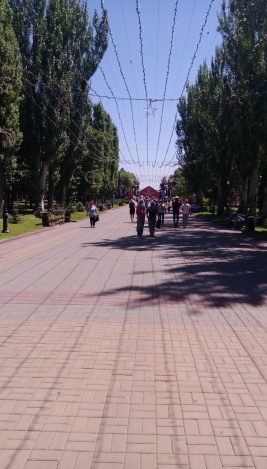 One thought on “Day One in Volgograd”