Larking about in Larnaca

Moscow in winter can be pretty depressing (i.e. snowy and wet), so my girlfriend and wanted to go somewhere warm to be reminded of what the sun was like. Therefore we found ourselves flying to sunnier Cyprus on Saturday. Arriving in the southeast of the country, we were immediately struck by how pleasant it was. The sun was shining? It was actually warm enough? Madness.

In order to get to our apartment in the city center, we had to take a bus. This was easier said than done, as once we got on, the bus in question took a roundabout journey getting to where we thought we needed to be. As in, it wound around the suburbs while eventually making its way to the city. We got off earlier than needed due to some lingering doubts of ending up where we needed to, after walking a bit we eventually saw the telltale landmarks (between a Nike store and a bookshop) that meant we’d arrived. After bumbling to find the key before belatedly realizing which dropbox we needed, we walked in only to encounter the cleaning lady. She was finishing up, but we didn’t mind this interruption since all we needed was to drop off our stuff before searching for a much-needed lunch; when you were up at 4AM, nourishment is needed by noon. Prior research indicated that the beach would be the best place for food, and this turned out to be the case. On the way there, we noticed lots of little shops offering kebabs, expensive nuts, and other miscellaneous services, but once we actually got to the ocean side, things opened up. We ended up at one of the recommended places in Larnaca, and boy was it worth it! The people there were incredibly friendly, and they actually gave us a discount for the incredible Cypriot coffee. Plus, the views of the ocean were tranquil-it was the perfect way to start out our trip!

From there, we walked around the city to St. Lazarus’ Church in the main square. As Polina and I both have been in our fair share of churches, we chose not to go inside (and to avoid the fee), but we admired the aesthetics of the place. We didn’t have much in the way of an itinerary since most of the stuff in Larnaca/Cyprus in general assumed you’d have access to a vehicle, but this actually ended up being a good thing. Being the adventurous souls we are, we made it a point of scouring the side streets. Our jackpot was finding plenty of clever graffiti/street art scattered around, which kept us occupied trying to see where they all were!

After wandering around a bit, we collectively decided to check out the Indian restaurant a few blocks away from our apartment. As I mentioned earlier, walking from the bus to our apartment led us to discover small cafes/eateries. One place on our radar was, of all things, a small Indian place on the corner of the street. Surprisingly, this was pretty popular as we witnessed plenty of people coming and going. Now, I’d normally be cynical about an Indian curry joint fairly far away from India, but lo and behold there were actual Indians in the kitchen. You know it’s good by that fact alone, but Polina’s experience in India led to give it a solid endorsement. After stuffing ourselves with spicy tandoori chicken, we sashayed over to a small, whimsical bar called Kleidi we’d spotted earlier when trying to find a different bar. With only about four tables, we were afraid that we wouldn’t be able to squeeze in on a Saturday night. Thankfully we were given a space and the girl behind the bar was incredibly friendly and bubbly. She was pleased beyond words to learn we made a beeline here, and you should have seen how her eyes lit up when we wanted to try the local cocktails. When in Rome, do as the Romans, or in our case, drink like the locals of Larnaca. I don’t recall what ingredients went into it, but I do recall that towards the end, I detected a sweet taste; I’m kicking myself for not inquiring more about it. At either rate, we both were able to sit back and listen to all the old school jazz being played. Kicking back and hearing legendary artists like Louis Armstrong hearkened back to the good old days, and boy was it something. Unfortunately, we eventually had to leave because our long day started to kick in, but it was a fantastic first day in the country. 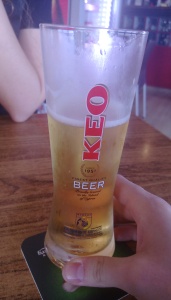 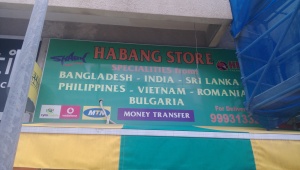 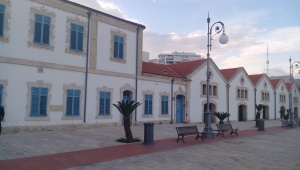